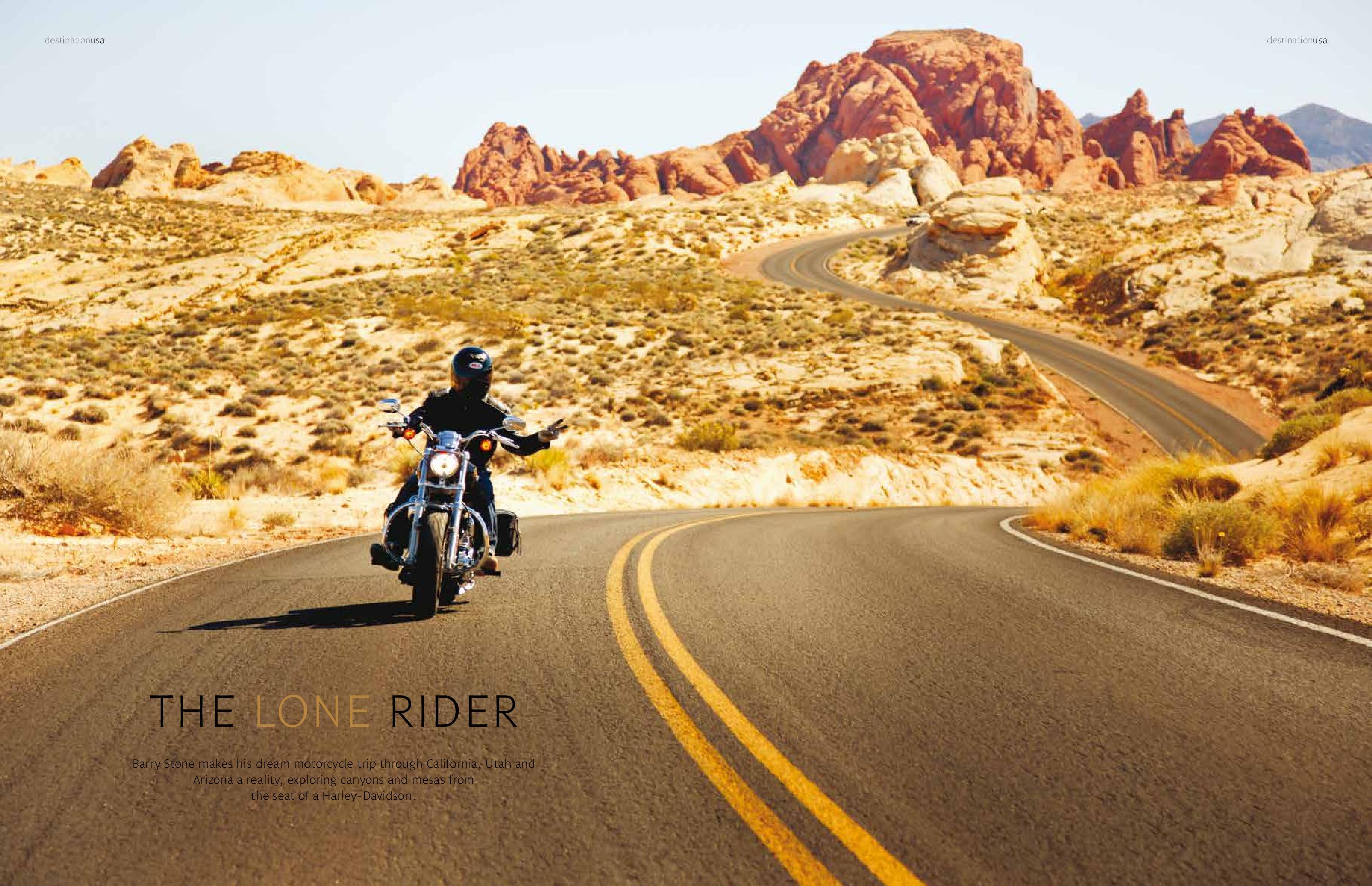 Finally, it was happening. After two aborted attempts, my idealized, romanticized motorcycle road trip across the USA was now a pulsating, mile-by-mile reality. Well, not ‘across’, really, but audacious enough for me: a loop from Los Angeles out through Nevada into southern Utah to within sight of the Colorado border, then south into the Four Corners region before turning west back towards California through northern Arizona following, as best as the sparse desert roads permitted, the Arizona/Utah state line. It was three weeks of canyons, mesas, buttes, hoodoos and juniper trees: a red rock kaleidoscope seen and felt from the comfy seat of a Harley-Davidson Electra Glide Ultra Classic, riding an average 300 kilometers a day with GPS, USB and Bluetooth atop a 1,746 cc engine. Over 400 kilograms fully loaded, it was more than five times my own body weight. I called it “The Beast”. Through rapids with names like The Claw and Satan’s Gut. Afterwards, I took everyone’s advice and read The Emerald Mile, the greatest white-knuckle account of rafting the Colorado ever written. A more family-friendly river experience leaves from the base of Glen Canyon Dam in Page, Arizona, with Wilderness River Adventures, and takes you through the placid waters of spectacular Glen Canyon, including Horseshoe Bend.

Marvels of the Old West

I braced myself against the gathering darkness while navigating a back road high in the La Sal Mountains searching for the spectacularly situated 3 Step Hideaway, a collection of timber buildings, including cabins, way off the grid in an isolated alpine landscape beneath the most star-filled sky I’ve ever seen. And there is Kanab, long dubbed “Little Hollywood”, where over 100 movies and TV shows have been filmed since 1924. You can still see the set of the 1960s TV series Gunsmoke, a collection of dilapidated buildings, which, given another 10 years, likely won’t be standing at all. Relics and echoes of the ‘Old West’ are everywhere here. At Goosenecks State Park, a stunning double bend in the San Juan River (geologists call it an ‘entrenched meander’) has cut its way through 300 million-year-old rock. We view it from an overlook at the end of a road in an area of ‘open range’. This unfenced grassland is a throwback to the unregulated grazing of the 1800s, when it was cheaper to hire cowboys to control your cattle than it was to build a fence.

The river is wild

Ranking the highlights of any three-week itinerary here is nigh impossible, but rafting the Green and Colorado rivers with NAVTEC Expeditions through the heart of Canyonlands National Park was as thrilling and terrifying a day as I’ve ever had, and for my new rafting buddy, too, who broke her arm when we were hit by a wall of water on Big Drop 1. We pulled to the riverbank, a splint was fitted and onward we all ploughed (well, you can hardly go back)

Utah is blessed beyond measure with its precious ‘Mighty Five’, five of the grandest national parks in the country – Zion, Bryce, Arches, Canyonlands and Capitol Reef – each worth the trip here. Even Capitol Reef, the least visited of the five, has the remarkable Waterpocket Fold, a dramatic 160-kilometre-long, step-like fold in the rock strata – a ‘buckle’ in the Earth’s surface – that is the park’s signature. It also has the Fruita Rural Historical District, a collection of buildings including a schoolhouse, original homestead and 3,000 apple, peach, pear, cherry, plum, almond, walnut and apricot trees, planted in the 1880s by pioneering Mormons along the banks of the Fremont River. It’s a welcome watery thread in a red rock world. You’d need six months to see the two billion-year-old palette of slot canyons, valleys and mesas that litter southern Utah and northern Arizona, shaped and scoured by time, wind and water. And even then you wouldn’t see it all. The fact is, no one knows all of it. And that, itself, is the lure.

Delta Airlines flies daily to Los Angeles from Sydney, with flights operated by Virgin Australia from Brisbane and Melbourne. delta.com

EagleRider is the exclusive provider of rentals and tours for Harley-Davidson in the USA. eaglerider.com Moab-based NAVTEC Expeditions runs half-day, full day and multi-day whitewater rafting trips on the Colorado River, as well as tours of Utah’s national parks and canyoneering adventures. navtec.com Wilderness River Adventures offers rafting and ‘float’ trips through the Grand Canyon, Cataract Canyon and Glen Canyon. riveradventures.com “You’d need six months to see the billion-yearold palette of canyons, valleys and mesas, shaped by time, wind and water.” A beast perhaps, but only hiking boots and a compass can deliver a deeper sense of immersion into one of the world’s great geologic jigsaw puzzles. And what an immersion it was, feeling the temperature drop on my way up to Delicate Arch in Arches National Park, and ascending Boulder Mountain on Scenic Byway 12 in the midst of the Dixie National Forest above the vast Aquarius Plateau, the last mapped region in the continental United States.