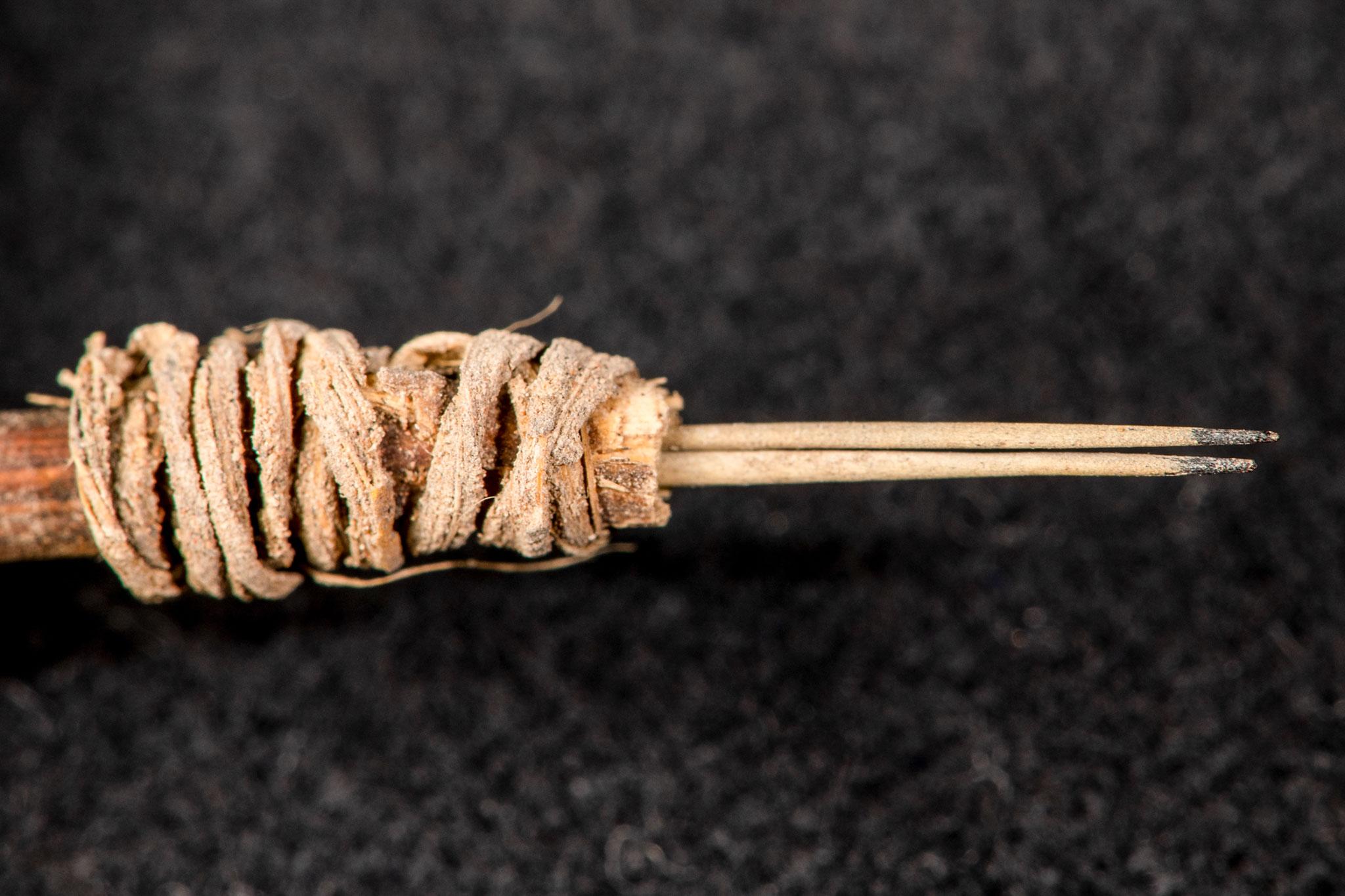 Once dismissed as an “odd-looking little artifact,” the tool pushes back evidence for tattooing in the U.S. Southwest by a millennium.

THE TOOL IS made from a bundle of prickly pear cactus spines, their tips saturated with dark pigment, inserted into a handle carved from lemonade sumac and bound with yucca fiber.

Some 2,000 years ago, a tattooist in what’s now southeast Utah used this tool to hand-poke a design into someone’s skin. After the point of one of the cactus spines broke off, the tool was likely tossed into a trash heap. It remained there for centuries, in a pile of bones, corncobs, and other discarded items.

Now, in a new paper in Journal of Archaeological Science: Reports, a team of archaeologists conclude that this cactus spine tool is the earliest evidence of tattooing in the Southwest.

The tattooing tool has had an interesting journey since its disposal two millennia ago. In 1972, a team of archaeologists excavated the trash heap in Turkey Pen site in the Greater Cedar Mesa area. Without giving much thought to the “odd-looking little artifact,” as one archaeologist later called it, the team packed hundreds of objects from the site into boxes for storage at Washington State University.

Andrew Gillreath-Brown was inventorying the collection in 2017 when he came upon the cactus-spine tool. The Washington State PhD candidate had previously volunteered at the Tennessee Division of Archaeology, and knew a prehistoric archaeologist there named Aaron Deter-Wolf, who had pioneered research on the archaeology of tattooing. Gillreath-Brown dashed off a text to his old colleague: “I saw this thing, and think it might be a tattoo tool.”

Deter-Wolf was blown away. If the bundle of cactus spines had indeed been used for tattooing, it would push back the archaeological footprint of the practice in the western United States by a full thousand years, to about 79-130 A.D. (An even earlier tattooing kit from the eastern U.S. has also been identified by Deter-Wolf, but the research is not yet published.)

It would also help researchers stitch together an emerging picture of when—and why—cultures around the world adopted tattooing, a widely practiced art that was almost lost under European colonialism.

So Deter-Wolf, Gillreath-Brown, and a handful of other researchers embarked on a year-long effort to confirm the tool’s purpose. In addition to microscopy and X-ray analyses, Gillreath-Brown reconstructed exact replicas of the tool and used them to tattoo pig skin. When he compared wear patterns on the cactus spines of the replica tools with the original under a scanning electron microscope, they were remarkably similar.

Art from this era in the Southwest, known as the Basketmaker II period, depicts people with body decoration, but until now it was unclear if the markings represented body paint, scarification, or tattooing.

“This is an interesting find made important and significant by the systematic analysis that shows, convincingly, that it was used for tattooing almost two millennia ago,” says Michelle Hegmon, an archaeologist at Arizona State University who wasn’t involved in the study. “That understanding, in turn, is important for our understanding of social identity” among the Ancestral Puebloan people, whose descendants still live in Native American tribes across the Southwest.

Here and elsewhere in the world, people seem to have embraced tattooing around the same time as they adopted agriculturally-based lifestyles. In the Southwest, Ancestral Puebloans were shifting from roaming patterns of hunting and gathering to settling into semi-permanent villages and cultivating maize. The climate was warming, and human populations were expanding. Deter-Wolf theorizes that tattoos may have helped coalesce a sense of identity in the face of so much upheaval.

“When you’re living cheek by jowl with these new people to whom you’re unrelated, you need to come up with things that will bond the group together,” he says. At the same time, tattoos may have been used to affirm individual identity, marking one’s ancestral lineage or specific achievements. “It’s kind of keeping your own personal history while simultaneously creating this overall group cohesiveness,” Deter-Wolf explains.

When European colonialists and missionaries invaded indigenous lands in North American and beyond, they often forbade the practice of tattooing among native peoples. In many places around the world, traditional tattooing all but died out. Even Western archaeologists of the 20th century mostly ignored evidence of the practice, perhaps because of lingering misconceptions that tattooing was “savage” or practiced only by marginalized sub-cultures.

The only evidence of traditional tattooing that seems to have survived among modern Puebloan people comes from anthropological surveys conducted in the mid-20th century. Among a laundry list of other queries, researchers asked tribal elders if their ancestors had practiced tattooing. Many, including from the Zuni, Acoma and Laguna Pueblos, said yes.

Dan Simplicio Jr., a Zuni Pueblo member and cultural specialist at Colorado's Crow Canyon Archaeological Center, says the idea of his ancestors practicing tattooing isn’t surprising. There’s a word in the Zuni language—dopdo’gna—that translates as “poking with a needle”, and the word for needle can also connote cactus or yucca spines.

Simplicio cautions that a single tool doesn’t provide enough evidence to confirm how Ancestral Puebloans’ used tattooing, or what designs they might have drawn. Still, there are enough commonalities between other indigenous cultures on the continent to venture some guesses. Many Native American tribes incorporated tattoos into coming-of-age ceremonies or to harness spiritual power, especially among women. Chin tattoos, radiating in lines from a woman’s bottom lip, were once common across the Americas, and Deter-Wolf thinks there’s a decent chance Ancestral Puebloan women may also have worn them.

As archaeologists pay more attention to tattooing, Deter-Wolf thinks more tools will turn up, painting a fuller picture of humans’ abiding inclination to ink our bodies. “My own personal thought is that tattooing is probably just about as old as humanity,” he says. “Probably, if we had the ability to chase this thing back, it would be one of those things like spoken language, or knowing how to make fire, that’s just incredibly deeply rooted in our symbolic being as humans.”