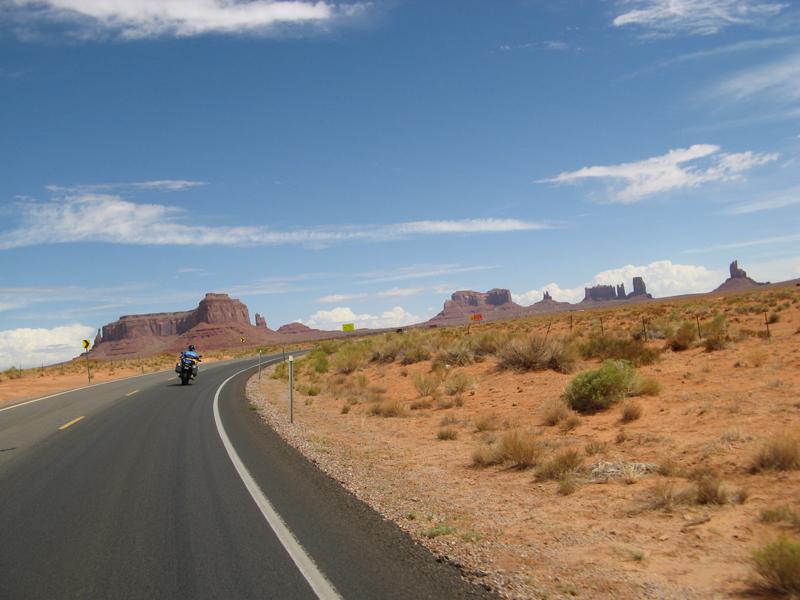 Our plan was a no-brainer: ride the Utah Backcountry Discovery Route (UTBDR) from Mexican Hat, Utah, to the Idaho border, starting in Santa Barbara, California. Packing along both the official map and GPS tracks, and having already nixed a couple of “expert” sections from our route, we set off.

My buddy Roger rode his new BMW R 1200 GS Adventure, while I saddled my 2009 F 800 GS. In my enduring quest for the ideal adventure rubber, I took a tip from Senior Editor Greg Drevenstedt and shod my GS with a set of Mitas E-07 tires (an E-07 at the rear) from Motorace for my own evaluation. (Read Greg’s review here.) Six hundred miles brought us from coastal California, through hellish desert heat to a cool, green oasis of dispersed camping outside Flagstaff, Arizona, for the night. Much of the next 200 miles to Mexican Hat, Utah, crossed the Navajo Indian Reservation, where the roadside artwork almost comes alive. Our northward ride included Monument Valley, the backdrop for many western movies. Hey, is that a stagecoach up ahead? The official UTBDR route starts with an easy ride on graded dirt and gravel through Valley of the Gods. We would later refer to this as “getting sucked in.” The desert can surprise you: from blue skies to brown in four minutes. The Moki Dugway–several short, steep switchbacks built for uranium ore transport–was a piece of cake. Following that, Snow Flat Road was more like a tough steak cooked well-done then dropped in the sand. The red menace met us within yards of the turnoff and harassed us all day. Airing down the E-07s, I prepared for the worst. We hit a welcome stretch of bedrock, lumpy but solid, then more sand–deeper sand, miles of it. Mitas rubber earned my respect here, the tractor-like tread of the rear E-07 grabbing sand by the bucketful to keep me afloat. There were a thousand thrills and no spills–a miraculous ride for this card-carrying sand hater. The GSA wasn’t as fortunate, requiring a few naps along the way. Our home for the night was–you can’t make this stuff up–Sand Island Campground on the San Juan River, near Bluff. It rained as we ate a cold dinner. Well-fed at the Twin Rocks restaurant in Bluff–and sand-averse–we skipped Butler Wash the next morning. Mud-averse, we also skipped the Abajo Mountains section due to pouring rain. The paved Hart’s Draw loop out of Monticello was more our speed, and rain didn’t spoil the scenery. Struggling to comprehend the meaning of “2,000 years ago,” we studied the hundreds of petroglyphs decorating Newspaper Rock on Utah Route 211. When the signs among a spider web of natural gas pipes say “Beware of Hydrogen Sulfide,” you can be pretty sure you’ve made a wrong turn–or two. Once oriented, rotting asphalt then dirt delivered us to the east side of the La Sal Mountains. The forest road through pines and aspen to La Sal Pass (more than 10,000 feet), is a 9.5 out of 10. Another ominous sign, “Four-wheel Drive Only,” marked the way down. But it was the route (*see note at bottom), so down we went. It should have said, “We hope your life insurance is paid up.” Within a few turns the steep, rocky road got steeper and rockier. There was no going back–our beloved GSs had become ten-ton monsters that crashed and banged down the chutes like rodeo bulls. Roger tipped over, we righted him. The next time, a couple in a side-by-side helped. Their parting message: “Go back, the road gets worse below.” On its third rock nap, the GSA started drooling oil. We were gudenstuck. On cue, saviors from Moab rolled up: two guys, one girl, two trucks. True fact: a GSA fits into a beat-up Tacoma with the tailgate shut, with room for my luggage. Taking the lead on my lightened motorcycle, I would scout a path through the rocks ahead, do my best to follow it and stop where possible. Then I’d catch my breath and repeat. I had it down, until I went down. The bike stalled atop a high berm when I failed pay attention to the throttle–chugga, chugga, click! Then whump as we landed on a fortuitous pile of rocks above a deep ravine. Several choice words later I climbed up and waited for the trucks. Four of us wrestled the GS back on the road in short order. Next up in the fun parade: rain, slick rocks and a fogging faceshield. The Mitas treads stuck to wet rocks almost like they were dry, but each chute took more energy from my flagging reserves until, near the bottom, I faced the Widowmaker. A left-handed switchback strewn with loose rock and several large set pieces dropped away in front of me. The outside wheel track was high-banked and loose, a small mistake there would spell disaster. The steeper path to the inside offered solid rock with good braking. A steering correction would take me through a small gap between rocks and onto a smoother way down. Not ideal, but a mistake here wouldn’t dump me off the side again. I the let the brakes off slowly, adjusted course and nailed the gap. From there it was just one more rocky section to the bottom. It was dark when the trucks showed up. We caravanned into Moab, found a motel, thanked our saviors and collapsed. Roger tore into the GSA the next morning, finding no damage to the valve cover. A small oil seep from the gasket was making a mess, but he was in no danger of running dry. We headed to Salt Lake City via pavement for repairs. But first, scenery. The La Sal Loop outside of Moab skirts the foothills on fresh new pavement, leading to Castle Valley. Light traffic and red rock panoramas were a perfect fit for our slow, tired pace. Utah Route 128 guided us north along the Colorado River, where in-your-face geology lined both sides of the road. At I-70 we struck west for Green River; a few miles later Roger’s clutch started failing and my motor began cutting out. Now we couldn’t get to Salt Lake fast enough. Or could we even get there at all? I limped into Salt Lake City with a bike that would run for miles, then stall, then run. Luckily, not on the final stretch of interstate to Harrison Eurosports, staffed by nice folks who keep time in their schedule for travelers. They told us that Roger’s clutch was toast and overnighted a new one (unfortunately not a BMW warranty item). My bike passed all the computer tests and their visual inspection. The next day, with time to kill waiting for the clutch install, I looked closer. The head of the kickstand bolt was gone, giving the stand enough side movement to activate the cutout switch. No bolt in stock, but Internet help in my pocket: cut the wires, attach red to white, leave brown alone. Bingo! Back on the BDR, we camped in the forest off of Utah Route 150 and enjoyed an easy morning’s ride. Back on dirt, we detoured to the 1873 cornerstone of Utah and Wyoming, before arriving in Evanston, Wyoming, for lunch. Shunning the off-ramp fast food, we found the Main Street Deli in town (recommended) for a last meal together. It was time for me to head home while Roger continued on the route, then up to Yellowstone. With pledges to try again next year, we said our good-byes and headed in opposite directions. With more than 1,000 miles to mull over the trip and look for where we might have gone wrong, about all I could come up with is that our loads should have been lighter. Not that weight killed the GSA or my kickstand, but it didn’t help the handling in the sand or coming down La Sal Pass one bit. What I did right was select a good tire–the Mitas E-07s performed like a champ on twisties, sand, dirt and rocks, and after 2,500 miles they had enough tread remaining to do the whole ride again. Another thumb up for Mitas–thanks for the tip, Greg!

*Once home, I checked the BDR web site, ridebdr.com, and found a notice posted shortly we left Santa Barbara: “The west side of La Sal Pass has become difficult to travel due to past flooding and OHV travel. It should be considered Expert Only and travel by Adventure Bike is not recommended at this time.”